From April 2018, all companies employing over 250 employees or more are required to publish information on the Gender Pay Gap figures on an annual basis.

It is not the same as equal pay. Equal pay deals with the pay differences between men and women who carry out the same jobs, similar jobs or work of equal value. It is unlawful to pay people unequally because they are a man or a woman.

What measures are used?

As at April 2022, the gender make up of Southern Housing Group comprised 41% male and 59% female, so our organisation has significantly more women working for us than men.

A high number of employees in the lower quartile and lower middle quartile sections work within care and support and a majority of these employees are female. Although Southern Housing Group pays the Living Wage Foundation rates for care and support roles, salary levels tend to be lower because of external market factors affecting what we can pay.  A high number of males work in higher paid market roles such as IT, Development and Property and where there are men in lower paid roles these roles tend to pay more such as Estate Care and SMS trade roles. Southern Housing Group pay gap is lower than the national average. 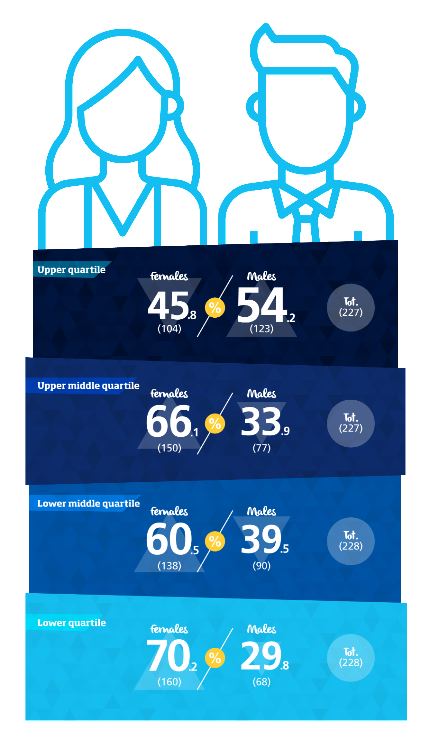 What is Southern Housing Group doing to address these issues?

An annual report on Equality, Diversity and Inclusion is presented to the Group’s Board each summer.

The Board has also approved an Equality, Diversity and Inclusion strategy which is underpinned by an action plan detailing the steps being taken within the Group to eliminate discrimination; advance equality of opportunity; and to foster good working relationships between all groups of people at work.