22 Argyll Street is one of the Group's homes for people with learning disabilities, based in Ryde on the Isle of Wight. Recently recently partnered with Fairhaven Housing Trust to undertake some major improvement works to the scheme, and residents became firm friends with the builders during the course of the project.

The recently completed upgrades took place over six months and the scheme now has an additional resident’s room (meaning the home can now accommodate nine people instead of eight), a new staff office, and an extended lounge area.

Naomi Keyte, our Head of Sheltered and Care Services, said: “The scheme now offers more space in the communal areas for the residents to enjoy. The lounge has a new work space for sewing and making things, and there is more room for staff members with a new sleep-in room and staff office.”

The contractor who undertook the works, WH Brading and Son Ltd, became an integral part of residents’ lives during the works.

Emma Bound, the Registered Manager based at 22 Argyll St, explains the close relationship workers from Brading formed with residents:

Despite some reservations about the safety and wellbeing of residents, the project couldn’t have gone any better. Before works started, we had the people from Brading who would be working on the project come in and meet the residents. Everyone got on really well and it laid lots of assumptions to rest.

Throughout the project, Brading kept in close touch with us and residents about what was happening and the impact it would have. There were many laughs on all sides, and it was an enjoyable few months. They became part of the home and our residents became very attached to them. They even helped one of our residents, Matthew, celebrate his birthday and brought him his favourite magazines and chocolates.

While they were here they built an en-suite bathroom for one of our residents, and told her they’d worked very hard to build it for her and would like to see her using it every day. Since then, she’s had a shower every day, something we’ve been trying to achieve for years.

“When works were completed, we had a leaving party, which helped residents come to terms with the end of the project and say goodbye. Our residents also asked the builders to sign their names into the concrete to remember the happy memories they had.

Last year, 22 Argyll Street achieved a ‘good’ rating from the Care Quality Commission, following a surprise inspection. This is an excellent result and recognises the hard work and commitment of colleagues from the Group’s Care and Supporting Independence Team who oversee our care and support services on the Island. 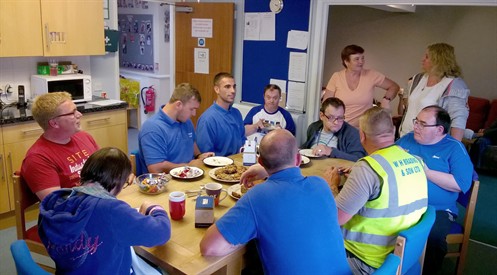