Cultivating a community at Jubilee Close

The Group’s Gardening Neighbours scheme, which awards grants of up to £500 for customers looking to improve their communities through gardening projects, has proved very popular since it was launched in March. Find out how the scheme has benefited the community of one proactive customer living in Freshwater on the Isle of Wight.

Melanie Gardiner first heard about Gardening Neighbours from Southern Housing Group’s Facebook page. She decided the scheme where she lives, Jubilee Close, could do with a makeover, especially after the appearance of a new development next door, Cameron Close, as the cosmetic differences between the two schemes were noticeable.

“The area around our flats was becoming messy and neglected, especially compared to the well-kept new builds nearby. I spoke to quite a few residents who all expressed an interest in doing something to improve the area, and then put in a bid to the Gardening Neighbours scheme, which gave us £470.

“We chose an area where quite a lot of people walk through, so would enjoy the new plants, and focused on adding some colour with plants that should hopefully spread and reappear next year. We bought scented roses, herbs, pots and other plants, and hosted a community planting date on 11 June with a barbeque lunch. I also spoke to our local Co-Op and petrol station about our plans, which lead to them sponsoring the planting event.

“We had around a dozen residents plus family and friends take part, and everyone had a great time and really came together.

“So many people have commented on how much nicer it looks, and since the day we’ve added even more flowers. We’re now planning on holding more get-togethers for everyone in the area. It would be great if as many people as possible can take advantage of Gardening Neighbours in this way.”

The Group’s Volunteer Coordinator, Marian Patterson, who first set up the Gardening Neighbours scheme, said: “We’ve had so much interest in the project. Most of the applications we’ve had have been to make good an area, such as planting flowers and bushes. One group have applied to create a small patch where they can show young children how to grow food; another group applied for a bird house to encourage wildlife, with outside benches so they can enjoy the garden and each other’s company.”

Later on in the year, Marian will be running a Gardening Neighbours competition, with winners from different categories. 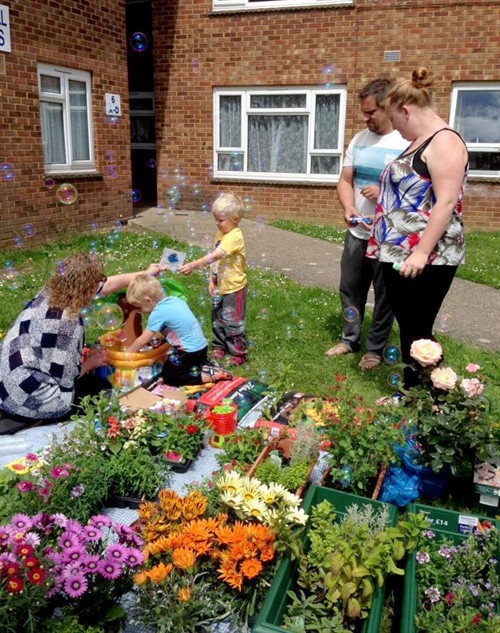 More photos from the transformed walkway at Jubilee Clos.

For more about the Group’s Gardening Neighbours scheme, please contact