Meet the customers: Edna and Hazel

Neighbours Edna and Hazel live in Janson Road, one of the Group's sheltered housing schemes in east London. They’ve seen many changes in their lifetimes and are a perfect example of how diversity has come to define both Janson Road and their local community. 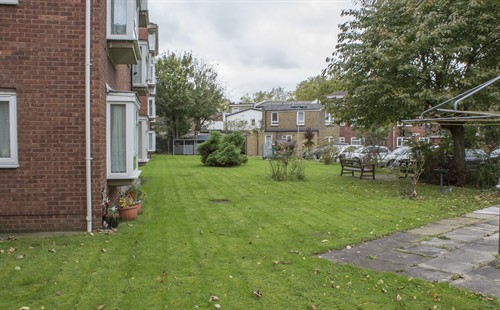 The scheme that sits between Janson Road and Gurney Road in Stratford has 64 flats that are home to residents aged between 60 and 99. Most here are single and over 75 with varying degrees of independence.

It’s known as a diverse and multicultural place to live, and the many languages spoken here include French, Mauritian Creole, Spanish, and multiple African and Asian languages.

“They called us here, I saw it in the paper, so I decided to come.”

Edna, 99, has called Janson Road home for the past nine years. Jamaica born and bred, she moved to the UK in 1958 and spent most of her career in nursing at the former Wanstead Hospital. Twice married, Edna has a daughter, a granddaughter, and two great-grandchildren.

They called us here, I saw it in the paper, so I decided to come. I worked at Shawls Surgical Stockings in North London. I worked there for a few years, saved my money, then I went away in 1966 for a tour. I alone. Then I came back in this country in 1969, then I got married and I went back to my job down at Shawls.

After a colleague of Edna’s left to work for Wanstead Hospital, Edna wrote to her asking for a job; shortly after, she joined the hospital as an auxiliary nurse and later retired there at the age of 60. 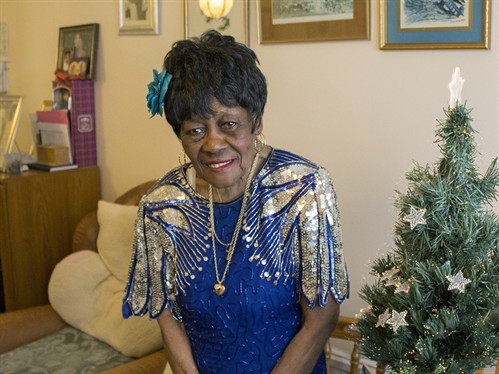 Edna’s experience of England in the 1950s was very different to the England she knows today:

The first time I came here, they hated us and called us monkeys. I told them: there is white monkey and black monkey, so you are a monkey as well, because you are white. We couldn’t get a place to live; they said ‘No Irish, no blacks, and no dogs.’ Never forget these things. But I don’t care. I am happy.

Edna met the prejudice she encountered with humour:

I was in a line, right? And before this woman, this English woman, saw I went in and she’s telling me off. I knew that they were going to say “Get back in your country.” I told her that - she was an Englishman, it was a joke! I told her that, and she was in her country!

So when I came here, it was alright, but it wasn’t so nice as now. Everything has changed now; they are friends. 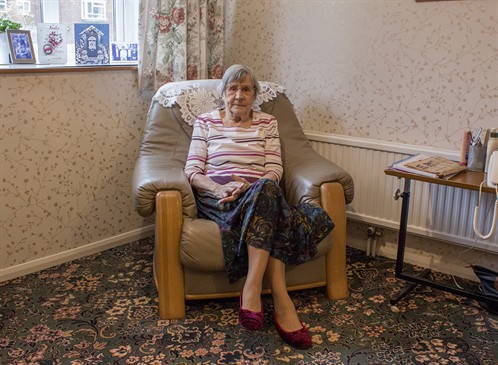 Hazel, 88, lives across the hall from Edna, and the two are friends. In contrast to her neighbour, Hazel was born in east London and spent her entire life close to where she now lives. The youngest of 13 siblings, Hazel lives next door to her older sister, Evelyn, and has one daughter.

Hazel has fond memories of east London in the 1930s:

My oldest memory is of opening the door, jumping in the snow, playing in the alley, and playing in the road. The coal cart used to come along and when the man came along with his horse and cart, I used to jump on the back and ride it. And he used to say "Get off, get off!", and we'd be dragged along with it.

We had a poor old lady at the end, she had one little shop, and therefore she had a brick wall. It was opposite our house then, I think we must have drove her barmy. Our ball - bang, bang - playing with two balls up the wall. And 'Knocking Down Ginger', that was murder. You'd knock on people's doors and run away and hide, and when they come out you'd go “Nyeeurgh!"

It was fun, but when I think about it, if I was old, I'd blow off. We did torment this old lady. We used to knock on her door, go "old crabby, old crabby!" She used to say, "Oh, I'll come after you!" Then we'd come back, knock on the door again. When I think about it, weren't we naughty? Absolutely naughty. Evelyn said "Well, you were the naughty one."

When asked to reflect on getting older, Hazel and Edna have noticeably differing points of view.

Hazel feels “bloody horrible” about it. She says:

I worry about it. Don't get me wrong, I don't mind people coming here, but I feel I should do what I do now; try and do my own work all the time. I don't want someone coming in and taking my place over.

As you get older, you can't do things you want to do, and therefore you think that you're in the way. It's sad, I think. I used to like to get ready, to go to my book club, but as the day goes on and the evening comes on, you've had enough. You get undressed, have your shower, ready for bed, and you think “Oh no, I can't be bothered," And I think that's the wrong way to get.

I think it's sad getting old. Do you know why? I think these youngsters, they don't mix with us. To me, I don't think you accept an old person properly. Perhaps it's me, don't get me wrong. This is my understanding with youngsters. They're young which I’ve been myself; I mean I didn't care, I was always out, never in. Never in. But I didn't realise.

Edna, the oldest resident at Janson Road, is more optimistic about getting older:

Let me tell you something now. I love young people. I told them when they're going to bed, say them prayers, because God is keeping us. I am happy for my age. Very happy. I don't do nothing to my face, everybody says oh my face don't have any wrinkles. My face is nice, I don't do nothing to my body, so I am living in peace. And when God is ready to take me from the world, it's ok. I even got a record when I die I wanted to play.

The young ones up here, I am the oldest one in this place, and I hear them talking about "I'm old, I'm old." I said, "Stop with that rubbish, stop it man!" They are young people, you know, in their 70s! Look at me - I'm 99, and I'm not crying that I'm old, and I don't feel old. God put us in this world and not all of us have to come old, so I am not worried about nothing. It’s a privilege. I’ve prepared my clothes to bury in already, when I die.

Huma Khan has been the Scheme Services Coordinator for Janson Road since April last year. Having worked in sheltered housing for more than 20 years, she knows how important it is to get to know each of her residents here and appreciate their differences:

The residents here are very self-sufficient and they know how to do things for themselves. When I first started here, they were a bit apprehensive, but we’ve built a good relationship now. They’re lovely people; if I need support or advice, they’re forthcoming. Trust is very important, and I work well with them.

Huma is one of 38 Scheme Services Coordinators the Group has, spread across 53 sheltered housing schemes Group-wide. This face-to-face support is relatively new; in the year this approach has been up and running, our sheltered customers have been vocal about the positive difference this has made to their lives.

I really look forward to coming to work. It’s so rewarding because you’re able to help people and it’s such a versatile role. The residents are happy there’s someone here they can go to. They mostly come to me for repairs, but also just to say hi or offer to help.

I get lots of thank yous, hugs and positive comments. I think it’s about being positive and establishing a presence, promoting yourself and being visible. If I don’t see people for a while, I’ll check in with them to see if they’re ok.

You need to be a good listener, flexible, and build good relationships with your residents. Trust and confidentiality are very important; residents must feel that they can confide in you, and you have to be open to listening to ideas.

Edna reflects how other residents feel about Huma: “I love her to my heart! She’s lovely, she’s very helpful, and I tell her I don’t want her to go.”

Although the backgrounds and experiences of these two women (who are “equally talented and great,” according to Huma) is very different, that they’re neighbours and friends is typical of this area in east London that is one of the most multicultural places in the UK, and where 147 languages are spoken.

When asked to reflect on what life has taught her and what matters to her the most, Edna says:

As for Hazel, she is altogether more pragmatic:

"Keep your mouth shut. Hear all, see all, and say nothing. That is the best thing."

Find out more about sheltered housing at Southern Housing Group.