On 16-18 June, communities around the UK came together in memory of Jo Cox MP, to celebrate her belief that “We are far more united and have far more in common than that which divides us.”

The event was marked nationally by more than 116,000 street parties, picnics and gatherings aimed at bringing together local communities in Jo’s memory. The MP for Batley & Spen in Yorkshire was murdered in June 2016.

The Group’s Stamford Hill estate held its own Great Get Together on the afternoon of Sunday 18 June, which included food, music and fun activities – including arts and crafts and drumming workshops and a paddling pool - for around a hundred people from the estate and local community.

The event was led by resident Sarah Warman, who has played a key part in other communal projects for the estate, such as the recent peace and wellbeing garden.

A grant from Southern Housing Group paid for the cost of food, activities, decorations and a gazebo, and local businesses, such as Whole Foods, Harvest N16 and Morrison’s, also donated to the event.

The Great Get Together was also a valuable opportunity to promote the Friends of Stamford Hill, a community group who primarily look after the peace and wellbeing garden and are looking to support other local community activities.

Sarah said: “It was really good; there was a really great crowd. It was hard work, but everyone had a good time. Stamford Hill is quite big and divided, but the day helped break down some of the barriers. It was a great way for people to get to know their neighbours and put names to faces.

“We were moved by Jo Cox’s story and held our own Great Get Together because the purpose of it really resonated with the guiding principle of our new garden – to bring people together.”

One resident who took part remarked: “I am disabled and usually housebound, so it’s extremely good to get out and meet people. Events like this combat the division that others are trying to create and builds a multicultural community. Jo Cox lives on.” 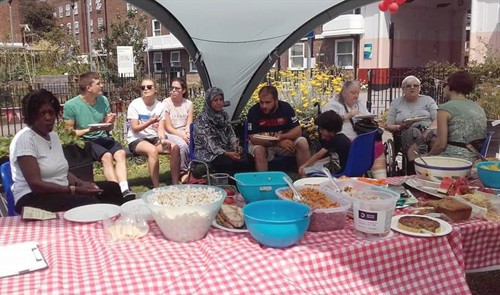